Aerial bundle cable are overhead power lines using several insulated phase conductors bundled tightly together, usually with a bare neutral conductor. This contrasts with the traditional practice of using uninsulated conductors separated by air gaps. This variation of overhead power lines utilizes the same principles as bundled conductors, except that they are closer together to the point of touching but each conductor is surrounded by an insulating layer (except for the neutral line).
The main objections to the traditional design are that the multiple conductors are considered unappealing, and external forces (such as high winds) can cause them to touch and short circuit. The resultant sparks have been a cause of bushfires in drier climates. In the UK where some supplies to rural property are converted to PME/MEN from TT Earthing system concerns have been expressed that the lower conductor alone may be broken, (by high vehicle or falling tree for example) but with the upper phase conductors intact. This is a potentially dangerous fault condition. With ABC, a simultaneous disconnection of all conductors is more likely.
In moister climates, tree growth is a significant problem for overhead power lines. Aerial bundled cables will not arc over if touched by tree branches. Although persistent rubbing is still a problem, tree-trimming costs can be reduced. 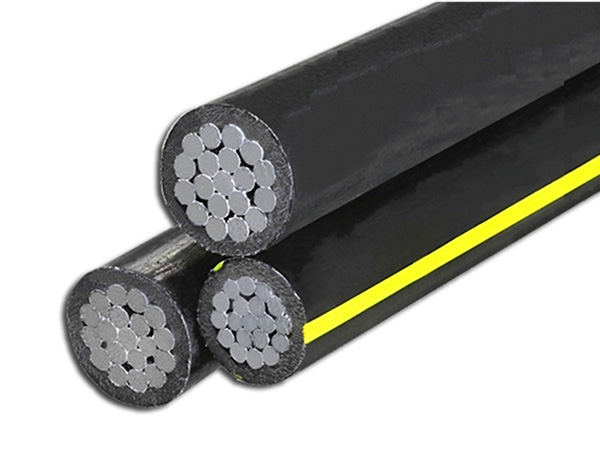 Areas with large trees and branches falling on lines are a problem for aerial bundled cables as the line degrades over time. Due to the very large strain forces cracking and breaking insulation can lead to short circuit failures which can then lead to ground fires due to dripping of molten insulation.
Low voltage ABC has already been developed in several countries across the globe and promises to be cheaper, safer, more reliable, require less tree clearing and pruning, be more aesthetic, be less labor intensive, require less maintenance and eliminate bushfires being initiated by conductor clashing.
Advantages
• Relative immunity to short circuits caused by external forces (wind, fallen branches), unless they abrade the insulation.
• Can stand in close proximity to trees/buildings and will not generate sparks if touched.
• Little to no tree trimming necessary
• Simpler installation, as crossbars and insulators are not required.
• Ease of erection and stringing, less labor intensive, less construction resources needed.
• More aesthetically appealing.
• Can be installed in a narrower right-of-way.
• At junction poles, insulating bridging wires are needed to connect non-insulated wires at either side. ABC can dispense with one of these splices.
• Less risk of a neutral-only break from tree or vehicle damage, increasing safety with TNC-s systems.
• Significantly improved safety for linespersons, particularly when working on live conductors.
• Electricity theft is made harder, and more obvious to detect.
• Less required maintenance and necessary inspections of lines.
• Improved reliability in comparison with both bare conductor overhead systems and underground systems. Insulated conductors prevent accidental contact and supply can be maintained temporarily in the event of a suspension system collapse.